Home » Android » Android Pie is spreading faster than its predecessor

Android Pie is spreading faster than its predecessor

Google has made a positive conclusion about the launch of Project Treble. The technology, which should accelerate the delivery of Android updates, therefore favors a rapid spread of Android 9 Pie. By the end of August 2019, Android 9 is said to have reached a share of 22.6 percent.

Although a market share of 22.6 percent a year after the introduction of an OS version, especially in comparison to Apple’s iOS does not sound outstanding, Google’s new statistics shows a very significant improvement over its predecessors Android 8 Oreo and 8.1 Oreo. The first was at the end of July 2018, also less than a year after its launch, only 8.9 percent of all Android devices installed. 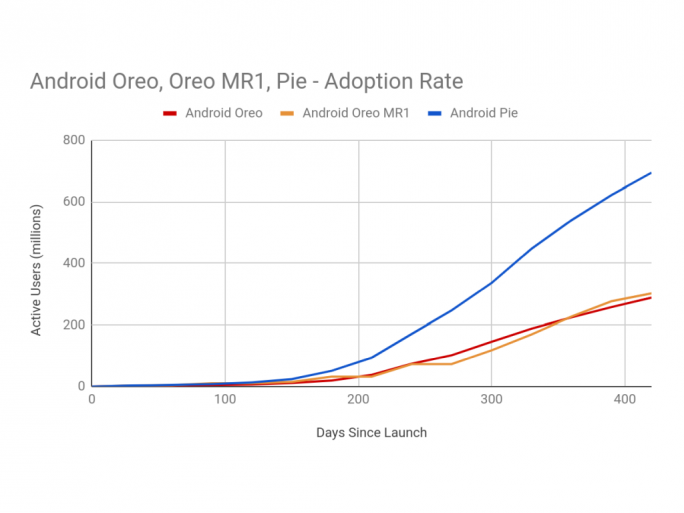 Thanks to Project Treble, Android Pie has a much higher penetration rate than its predecessors (Image: Google). Google introduced Project Treble with Android 8. A component of the technology are the so-called Generic System Images (GSIs). They are Android builds without any customization from device manufacturers or mobile operators. Treble-compatible smartphones are capable of running these generic system images, building on the existing vendor implementation of a device. A new OS update from Google requires no or only a few adjustments to the hardware of a smartphone – so far a time-consuming process.

“One of the first indications that Project Treble had a positive impact was our ability to run the beta program for Android 9 Pie on many more devices from more vendors. In addition to Google’s Pixel smartphones, we had seven device models from seven OEMs supporting Android 9 Pie Beta, “writes Iliyan Malchev, Project Treble Architect at Google, in a blog post. With Android 10, the number was even increased to 18 devices from twelve manufacturers in addition to the Pixel Smartphones.

Project Treble has also been further developed with Android 9. “The most important was our behind-the-scenes collaboration with chipmakers. This work has had the effect of reducing the average upgrade time by more than 3 months, and we expect that upgrades from Android 9 to Android 10 will take place much earlier this year, “added Malchev.

The hope of Google does not seem to be unfounded. Among other things, Samsung launched its new Android beta program in October, about two months earlier than Android 9. Whether the final version will be distributed earlier remains to be seen.

For the distribution of the other Android versions, Google does not provide any information. The once-monthly updated Android dashboard is still at the level of early May.