Asus has launched its new smartphone under the Republic of Gamers (ROG) brand. Not only the design of the Asus ROG Phone 2 is a bit different than the typical smartphones, also the inner life is specially adapted to the playing of mobile games. For example, Asus has positioned the WLAN antennas inside such that they are not obscured when users hold the smartphone in landscape mode when playing games. The power supply in this mode is provided by a second USB-C connector on the long side of the device, so that the hand does not get in the way when holding it. Another special feature is the cooling system “GameCool 2”. Special cooling chambers and newly designed ventilation louvers channel the heat generated during the game from the inside, allowing the chip to work more effectively.

All these optimizations are effective and useful in gaming, but make the ROG Phone 2 hard too. A whopping 240 grams brings the smartphone on the scales. Another point to keep in mind: The device is very susceptible to fingerprints even in the dull version. Regular cleaning of the surface is therefore essential.

The back of the ROG Phone 2 is special. Asus relies on color change in the logo

Gaming requires performance. The ROG Phone 2 features the new Snapdragon 855+ from Qualcomm, which is an overclocked version of the previous Snapdragon 855. The chip is one of the current top SoCs (System on a Chip), which are currently used in smartphones. Eight cores with a clock rate of up to 2.96 GHz promise high performance. In addition, there is the integrated graphics unit Adreno 640, which should also implement high-resolution graphics and fast motion smoothly.

Asus offers the ROG Phone 2 in an Elite Edition with 12 GB of RAM and 512 GB of internal memory as well as an Ultimate Edition with 12 GB of RAM and a whopping 1 terabyte of memory. This gives users plenty of storage space for their games and scores. To match this, the gaming smartphone comes with a 6.59-inch AMOLED display with HDR support and 2,340 x 1,080 pixels. The refresh rate is 120 Hz – a lot for a smartphone. Games are therefore more fluid and there are fewer streaks in the presentation. However, it should also be said at this point that it is difficult for the human eye to make a difference between 60 Hz and 120 Hz. But what users will notice is the fast response time to input. Asus himself calls a latency of 49 milliseconds. Even in hands-on, we noticed that the smartphone implemented inputs rapidly, which can make the difference between victory and defeat in action-packed scenes quite. 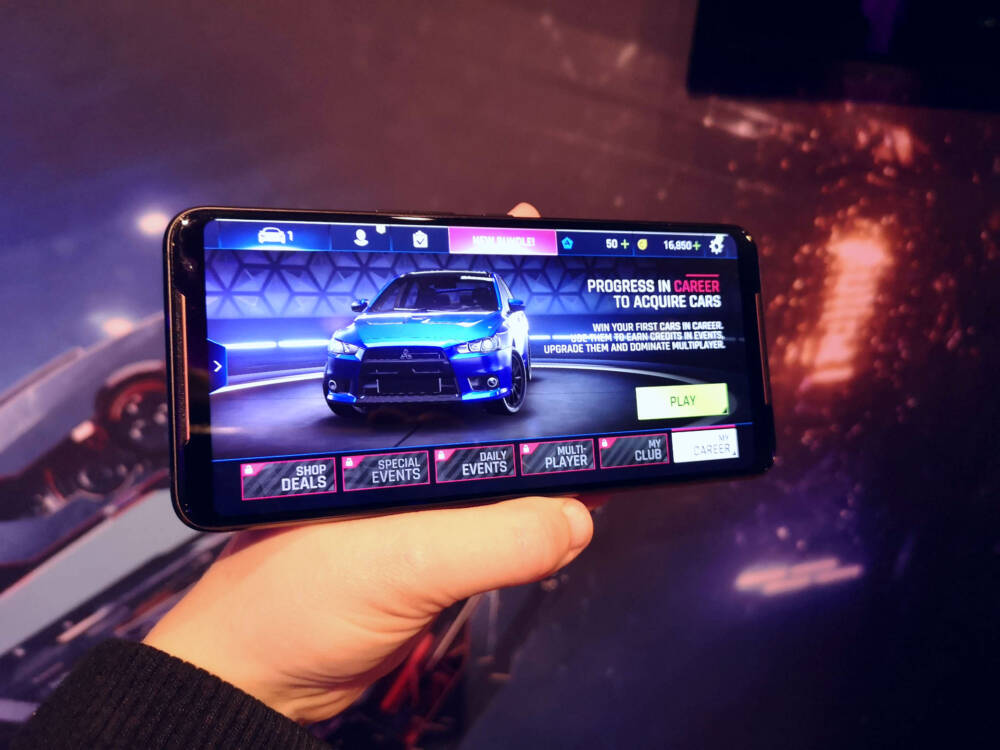 The game is played in a special gaming mode, which can be opened by clicking on the corresponding icon. When activated, the ROG Phone 2 focuses its performance almost completely on playing. In addition, annoying pop-ups of notifications are hidden, so that users are not disturbed during the gambling. If you control via the touch screen, you will notice a slight feedback during swipe and touch gestures. In addition, built-in vibration sensors provide haptic feedback while playing. If you want, you can also connect special accessories to the ROG Phone 2. For example, Asus offers a GamePad with real controllers and a dock to connect the phone to an external monitor. There is even a module that almost turns the gaming smartphone into a Nintendo DS-like console. Below is the ROG Phone 2 inserted and controlled via the touch screen. At the top there is a second screen, over which the display takes place. The whole thing can even fold over a hinge.

Mario Kart Tour for your smartphone – that’s the first level

Overall, the gaming experience on the ROG Phone 2 is surprisingly close to gaming on a real console. The smartphone can be kept comfortable especially with the GamePad. The side ports for the USB-C charging cable and the headphones are quite handy during the gaming session – after all, the cables do not interfere with the holding. We still could not clarify the question of how long the permanently installed 6,000 mAh battery will last for a while. After all, the high capacity but promises a long breath. The battery is charged quite quickly thanks to 30 watts. A special cable is not necessary for the high current transfer.

The predecessor in the test: Thus, the first ROG Phone proposes

The most important data summarized

While the Elite Edition for just under 900 euros is now available, interested parties to the Ultimate Edition have to wait a bit. This will come on the market during the fourth quarter of 2019 and offers twice as much memory. Downstream speed is also slightly faster with the LTE Cat.20 (2 Gbps) than the more affordable model that supports the LTE Cat.18 (1.2 Gbps). But with just under 1,200 euros, it is also much more expensive.