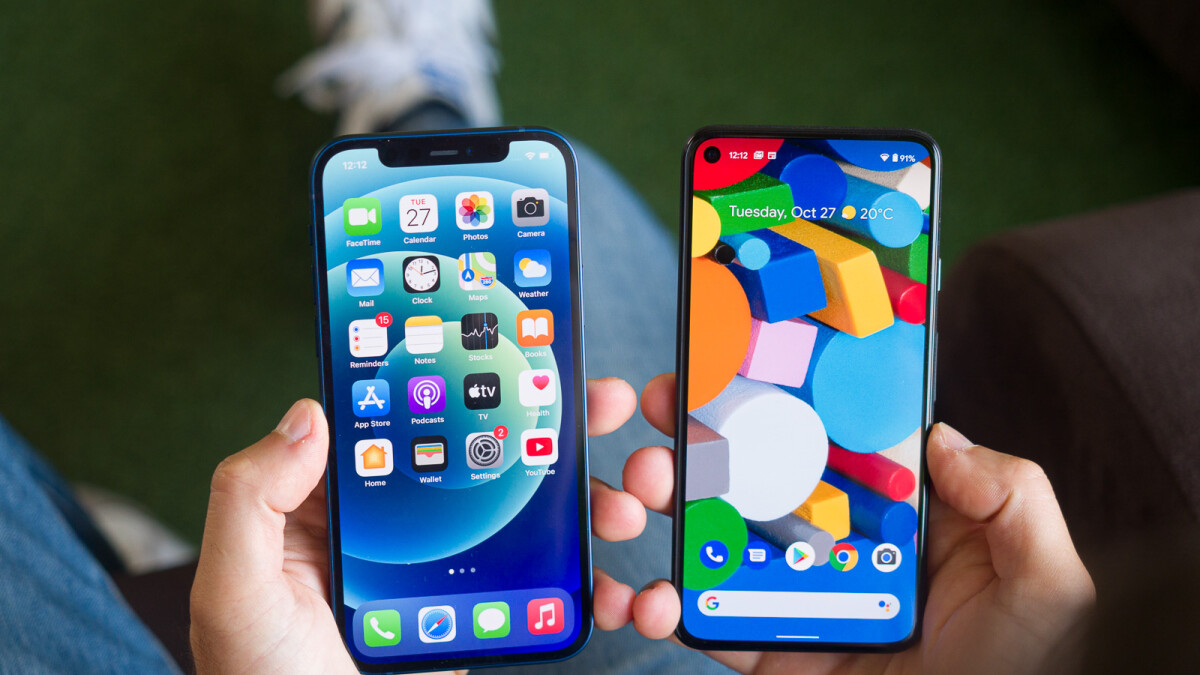 In this article, we will compare the Apple iPhone 13 Pro with the Google Pixel 5. In truth, these two devices belong to completely different price ranges, and they are not exactly on the same playing field. The iPhone 13 Pro is considered a high-end smartphone, while the Pixel 5 belongs to the mid-range. The thing is that the Pixel 5 is the best smartphone that Google introduced last year, while the Pixel 6 series was not yet on the market when this article was written.

The iPhone 13 Pro and Pixel 5 are definitely similar in regards to size, and the iPhone 13 Pro is the best Apple has to offer, next to the gigantic 13 Pro Max, of course. So, comparing these two handsets does make sense. It may be handy if you’re thinking of getting the best from either Apple and Google, while keeping things somewhat compact.

That being said, let’s kick off the Apple iPhone 13 Pro vs Google Pixel 5 comparison, shall we.

These two smartphones are quite different in design. iPhone 13 Pro is made of stainless steel and glass, with straight edges all around. The Pixel 5 has a metal unibody construction, but this metal is completely covered with resin or plastic. This plastic has a different feel than you would expect, being slightly rubbery. The point is that the phone feels really good in the hand. The Pixel 5 is definitely easier to hold and feels better in the hand. It’s also much less slippery.

Just came in:  Ethereum.org Shifting from 'ETH 1' and 'ETH 2' to 'Execution Layer' and 'Consensus Layer'

The iPhone 13 Pro has three cameras on the back, plus a 3D TOF sensor. Those cameras are located in the top-left corner. The Pixel 5 has two cameras, and they’re placed in the same spot. You’ll notice a fingerprint scanner on the back of the Pixel 5. The iPhone 13 Pro doesn’t include one at all, though it does include advanced facial scanning, which is the main reason it has that notch on the front.

The two devices are very similar in regards to dimensions. The iPhone 13 Pro is slightly taller, wider, and thinner. It is noticeably heavier, though, at 204 grams, while the Pixel 5 weighs only 151 grams. That’s another reason why the Pixel 5 is more comfortable to hold, and a better option for one-handed use. If you like that premium feel that stainless steel and glass offer, though, the iPhone 13 Pro is the way to go. It’s all a matter of preference.

The iPhone 13 Pro includes a 6.1-inch 2532 x 1170 Super Retina XDR OLED display with a 120Hz refresh rate. Apple also refers to this display as ‘ProMotion’ display, which is its name for that high refresh rate. The display is flat, and it does support HDR content. This panel gets quite bright at 1,200 nits peak brightness. It is protected by “scratch-resistant ceramic glass”, and it does support Dolby Vision.

The Pixel 5, on the other hand, sports a 6-inch 2340 x 1080 OLED panel. This display is also flat, and it offers a 90Hz refresh rate. It does support HDR10+ content, and it’s protected by the Gorilla Glass 6. This panel does not get nearly as bright as the iPhone 13 Pro’s display, by the way.

Many people would argue that the 90Hz refresh rate is more than enough for the display to feel smooth, if implemented correctly. Well, the Pixel 5 does it better than pretty much every other 90Hz phone we’ve tested. So, you won’t notice a major difference between the two phones in that regard, which is good. What you will notice is the brightness. The Pixel 5’s display does not get bright enough under direct sunlight, while the iPhone 13 Pro’s does. The viewing angles are excellent on both displays, though, and both offer vivid colors, and are well-balanced.

When it comes to performance, both devices deliver. The iPhone 13 Pro is much more powerful on paper, though. It comes with Apple’s new A15 Bionic chip, which is considerably more powerful than the Snapdragon 765G inside the Pixel 5. These two chips are in completely different tiers, though, so that is to be expected. The iPhone 13 Pro comes with 6GB of RAM, while the Pixel 5 offers 8GB of RAM.

Now, despite the fact the iPhone 13 Pro has a much more powerful SoC, both phones offer excellent performance. Not once during our usage did we want for the Pixel 5 to come with a more powerful chip. It did everyday tasks like a champ, which includes heavier multitasking, image processing, and so on. It even does a really good job when it comes to games, though the iPhone 13 Pro will truly shine in that regard.

The iPhone 13 Pro will offer you far more future-proofing in regards to performance, that’s for sure. That chip on its own guarantees it, not to say that it will be getting updates for a longer period of time and whatnot. Still, if you want to get the Pixel 5, its processor shouldn’t deter you from doing so. It does still perform great, and it will stay that way for the foreseeable future.

The iPhone 13 Pro comes with a 3,095mAh battery. The Pixel 5 includes a 4,080mAh battery pack. iOS and Android handle battery consumption differently, and Apple’s phones usually need smaller batteries than their Android counterparts. Having said that, both of these phones offer excellent battery life, to say the least. The Pixel 5 was one of the best battery longevity Android phones we’ve tested in the last year or so, and the iPhone 13 Pro proved its worth in that department as well, even though it launched recently.

Both of these phones will likely be able to provide you at least 7 hours of screen-on-time during your day, they’re that good. You could go above that, of course, considerably, depending on your usage. Gaming will affect the battery life in a negative way, but both of these phones are road warriors. Both Apple and Google did a great job when it comes to battery life, and the vast majority of you won’t be even close to draining them before the end of the day.

Just came in:  You'd Almost Never Know This Is A Gaming Phone From Lenovo

These two phones are considered to be amongst the best smartphones for still images in the market. The Pixel 5 does include a rather old main camera sensor, as Google has been using it since the Pixel 2, but it’s still very competent. The iPhone 13 Pro sports three 12-megapixel camera sensors on the back, and a 3D TOF sensor as well. The Pixel 5 has a 12.2-megapixel main camera, and a 16-megapixel uawide unit.

Now, during the day, both phones do an excellent job. By default, images from the Pixel 5 are a bit bluer, that’s what Pixel phones usually deliver, and most people seem to prefer that approach. The iPhone 13 Pro does come with a feature that allows you to tweak your images before you even take them, choose a different color temperature of the image, essentially, which the phone then bakes into the image. It’s a very neat feature. So, you can get similar results to the Pixel 5, in regards to color temperature.

You can get really detailed, sharp images during the day, with excellent dynamic range, on both smartphones. Night shots are different on the two devices, though both do a very good job. The Pixel 5 images do have more noise in them, though not much. The iPhone 13 Pro does manage to preserve more detail in such scenarios, though light flares are an issue for the device, more than they are for the Pixel 5. When it comes to video recording, the iPhone 13 Pro does a better job in pretty much every way.

The Apple iPhone 13 Pro comes with a set of stereo speakers, and so does the Pixel 5, kind of. The Pixel 5 has a main speaker on the bottom, but its secondary speaker is placed under the display. That makes it sound muffled, and it cannot really measure up to a front-facing speaker. Therefore, the iPhone 13 Pro audio via those speakers sounds louder, clearer, and overall better.

Neither of these two phones has a 3.5mm headphone jack, in case you were wondering. You can get really good results if you hook up a pair of headphones, via cable, or wireless. Do note that your headphones need to actually be good to get proper results. Neither of the two phones will amaze you with sound quality, but they do offer good results.

This article is based on a publication on androidheadlines.com

Published in Android and General