IPVanish: The American VPN provider in the field test

By Chris Westermann on November 30, 2019
All in all, IPVanish has laced one of the better VPN packages. In terms of security features, speed and operation little wishes remain open. A special mention deserves the opportunity to use a license on up to ten devices at the same time. And if you only need a VPN provider for a few weeks, you will find a really low one-month price here. In addition, the service offers nothing puzzling or extraordinary.

Assessment of the editor

Being on the Internet without an encrypted connection reveals private secrets of all kinds and makes you the target of spammers and cybercriminals. That’s why there are VPN services. But the offer is gigantic. Does IPVanish deserve a recommendation? The test clarifies it.

IPVanish in the test: What does the VPN service offer?

Here is a brief summary of the features that IPVanish offers its users:

IPVanish: If you want, you can switch to OpenVPN in the settings of IKEv2.

IPVanish: How safe is the provider?

The security features of IPVanish are impressive. The service supports several VPN protocols, including OpenVPN and IKEv2 . By default, Windows is set to IKEv2, which is commonly considered a stable and fast VPN protocol. In combination with AES-256 , it is basically unbreakable. If you want, you can easily switch to OpenVPN, L2TP, STP or PPTP in the client.

Also a kill switch is installed. In the event of an unplanned termination of the VPN connection, this ensures that private data does not accidentally migrate to the Internet. Incomprehensible: The Kill Switch is not switched on by default after installation, but the user must manually activate it in the settings. The bottom line is the protection of IPVanish but rock solid. This is also shown by the DNS tests performed by TECH SCURRY. IPVanish reliably disguises the location, the IP address and browsing activities.

Just about every VPN service promises top speed. So also IPVanish: “We deliver the best VPN speeds.” Unfortunately it is unfortunately the case that encryption reduces the speed noticeably – as with IPVanish. The speed tests in the speed test of TECH SCURRY with the default settings of the client gave solid results: Although the service slowed down the Internet line noticeably, but overall the results can be seen and are more than sufficient for surfing, downloading and streaming. However, other providers such as NordVPN or ProtonVPN were significantly faster. 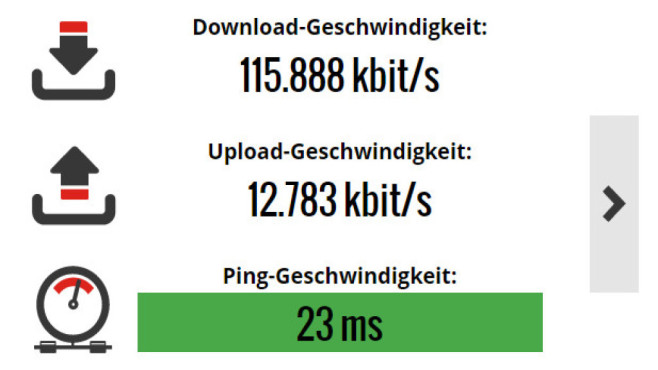 The bottom line was that the tempo measurements with IPVanish turned on good results.

Does IPVanish VPN work with Netflix and Geoblocking?

Speaking of streaming: How about Netflix ? IPVanish is covering the issue on its own page for good reason. After all, Netflix has one of the most sophisticated VPN detection systems and does not like it when foreign users access the US media library, for example. Because that gives stress to the rights holders. However, with IPVanish, streaming from foreign Netflix is possible , for example via the US server based in Chicago. In addition, content from the German Netflix can be played via the same server. The attempts to play German television channels via a server in Frankfurt via the streaming service joyn.de or films in the Arte-Mediatheque were crowned with success. At this point, so little wishes remain open. It was similar with Surfshark and VyprVPN .

Set up and use IPVanish VPN

The Windows client leaves a good impression. He certainly deserves no beauty award, but leaves little to be desired in terms of operation and functionality. The IPVanish log-in succeeds uncomplicated. Who does not want to deal with topics such as VPN protocol and encryption, just click on “Connect”, and a few seconds later is the secure connection. The also used iPhone app proved to be uncomplicated in this regard. The only point of criticism: A German language version does not offer IPVanish, Central Europeans have to decide between “English” and “Español”. 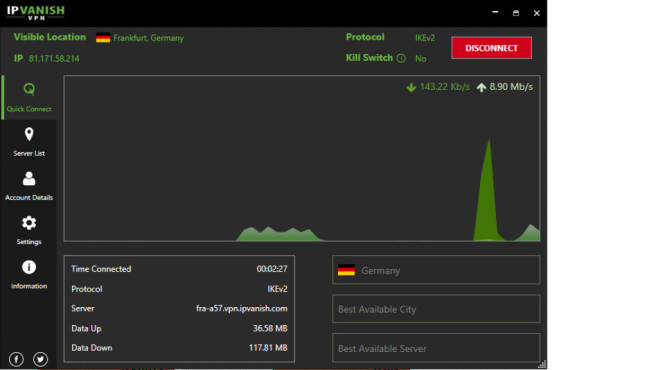 The surface of IPVanish gives little cause for criticism.

How trustworthy is IPVanish?

A good VPN provider is that it does not store personal information about its users. Because otherwise he would know which pages the users visit and which data flow. It would also be possible to sell the collected data profitably. IPVanish promises not to do that. Can you believe that? There were reports that in 2016, IPVanish passed user data to the US Homeland Security (United States Department of Homeland Security). This has shaken the trust in the service lasting .

But: The company with headquarters in the US has a new owner since 2017. And the new Vice-President Jeremy Palmer promises sincerely : ” IPVanish does not log or store user data . I can not say what happened under the previous management. However, we do protect the privacy and privacy of our users, regardless of who asks for it. “A clear commitment, however, is that the US is one of the so-called ” Five Eyes “ , a close alliance between the US, UK, Canada and Australia and New Zealand. In this club, intelligence agencies that specialize in intercepting electronic networks and evaluating them exchange information with each other. Those who want to avoid the watchful eye of this surveillance alliance should rather rely on services such as ExpressVPN (British Virgin Islands) or NorthVPN (Panama).

IPVanish costs: how cheap is the service?

In principle, IPVanish offers only one pricing model, which only differs in duration (one month, three months and one year). For all terms, a monthly price of the equivalent of 10.91 euros is charged . Note: This is the recommended retail price (RRP) of the provider. But IPVanish drives – like almost all other VPN services – continuously discount campaigns with different conditions. The real costs are usually far below. However, TECH SCURRY always takes the non-binding price recommendation of the provider as the basis for the VPN services, as it is otherwise impossible to establish a comparability between the services. The payment options for IPVanish are clear: the service can only be subscribed to by credit card or PayPal. Anonymous payment options such as Bitcoin are not available . For dissatisfied customers, however, there is a seven-day money back guarantee .

All in all, IPVanish has laced one of the better VPN packages. In terms of security features, speed and operation little wishes remain open. A special mention deserves the opportunity to use a license on up to ten devices at the same time. In addition, the service offers nothing puzzling or extraordinary. The test conclusion of the TECH SCURRY for IPVanish is “good” .